Somewhere There (Toronto, ON) 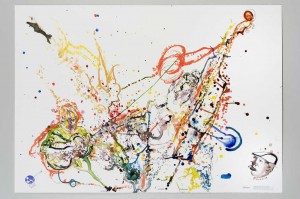 Although this is not directly relevant to a maker shop, I thought I would post this anyways because it deals with a “space” that was created, and and I thought you all would appreciate it anyways.

I visited Somewhere There Studios in Toronto and got the chance to talk with Scott Thomson who owns the place. He explained that Somewhere There is a venue for live experimental music that filled a void in the Toronto area. The space opened up about 2 years ago, and currently has live shows 6 nights a week. Somewhere There also hosts one long standing Toronto weekly series “Leftover Daylight” that is now in its 5th year.

Scott explained that he took it upon himself to open up the venue when he saw that all lot of the smaller venues in the city were closing due to rising rent. At Somewhere There he is responsible for curating many of the shows and taking care of the day to day business dealings, he also writes a blog about Somewhere There.

Currently he is running the place to give artist a venue for their music and to and keep the music scene alive in Toronto. He is not exactly making money on the venture, he is actually losing a bit each month, but looking from his perspective, he see a great value in providing the space to the community, he gets to be involved in the music that happens there, and during the day time the space is used as his personal studio.

Somewhere There is located just off of a public transit line on the corner of Dufferin and Melbourne Avenue just outside of the Toronto center. Inside, after walking up the stairs, there is about 1000 sq feet of area. The stage is on the same level as the seating which is mostly couches and a few chairs (that were in high demand when I visited). There is enough room for any modest size band and on one end of the stage there is a upright piano, but it wasn’t in working order when I was there. Typically the shows are small 10-20 people. This makes for a very intimate situation, and as Scott spoke of it, it jumps over many of the hassles of a bar or similar venues pose.

When I asked Scott if he had trouble finding artists to play each one of the six nights there is live music, he said that there has been no problem since he opened, and the artists are actually coming to him. I understand how this could be the case, as the size and the laid back atmosphere made me feel very comfortable and welcome, and I can understand how artists would also appreciate the setting.

When I was there Philallistah, Ken Aldcroft Convergence Ensemble, and dysfunct all took the stage. Each group performed twice or at least the Convergence Ensemble did as I could not tell the difference between Philallistah and dysfunct, almost all of the members stayed the same. The Ken Aldcroft Convergence Ensemble, who Scott played with during the second set, was a 5 piece that night, percussion, upright bass, 2 horns, and guitar. They were quite interesting to listen to and I later learned some of the members are also involved in The Association of Improvising Musicians Toronto (AIMToronto). In the back of the room where some select recordings were for sale, I picked up a recording by AIMToronto who in 2007 performed Anthony Braxton’s Creative Orchestra in Guelph circa 2007. Philallistah or dystunct? was an experimental indie band pictured below. They moved around different genres during their sets so it’s hard to describe their sound, but I quite enjoyed it when the members of the band all sung without mics during parts of a song, something that would be quite impossible at other venues. It was also quite evident they were enjoying themselves, and I am glad to have seen them. 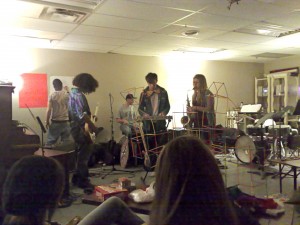 In the Future, Scott has plans to hand over Somewhere There to a group of like minded people instead of running it by himself. Before he does that he wants to workout all of the kinks in the operation, and make sure that the space is sufficiently established so that it can continue pushing forward. If you are in the area and interested in seeing the place come with open ears and enjoy yourself, beverages are in the back and the profits go towards fixing the piano.