Had fun last weekend i though i’d try this again. [See this thread for bobble’s previous progress]

The Setup
Same configuration but had some new tins… ms. bobble got these tall tins used for olives, courtesy of seward coop.

Molding Sand
I’m using silica sand and bentonite clay. It seems that bentonite isn’t very common. Some people will use ground up cat litter because it has some bentonite in it. Fortunately i was able to find a local source – I got bentonite from minnesota clay co. in edina. I got a 25 lb box,  it’s a powder and it is really fine… so fine that it some with a material safety datasheet with warnings about cancer. I worked outside and held my breath to avoid breathing it. don’t remember the exact proportions… i made small batches and just threw them into a pail when they felt right. I got the sand at home depot.

Tourettes By Proxy
my neighbor had the windows open. i heard him yelling, “efff!! EFFF!!! YOU EFFERS!!! NOOOOOooo!!!”. at first i thought he was yelling at his kids then i realized the vikes were playing. i can only handle the vikes so much. go vikes.

anyways, great day to be outside! i was doing double duty — filling the crucible with aluminum and then pausing to fill the foundry with charcoal. i was melting cans and some aluminum pieces a buddy donated. whenever the flames weren’t roaring like a blow torch i’d toss in more charcoals into the foundry. the crucible would occasionally shift inside the foundry. three times i lifted the crucible out and put more charcoals at the bottom of the foundry. after the cans were all melted, i shut off the hair dryer and pulled out the crucible. it felt heavy and i was a little nervous handling it. i tried skimming off more crud with a spoon.

when i first poured the aluminum the sprue filled up quickly. initial thought was the sprue choked and that there’d be some defects. with the remaining molten aluminum i tried making ingots. first poured into an old muffin pan. i also poured some into a tin can. grass was smoldering. 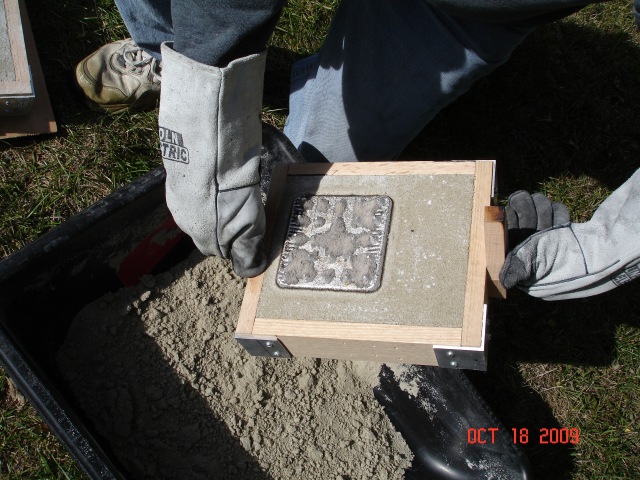 Casting Of Discernible Awesomeness
after about 1/2 hour i dragged ms. bobble outside to see me open the mold. i lifted the cope all i could see was the scorched sand on the drag. YES! i flipped the cope over and the casting was alll filled in, NO DEFECTS!!! OOH RAH!!!

the casting was still hot. picked at it with a tool to dislodge the sand. some sand is bonded to the tips of the hersey kisses which is extra fine by me. makes the points sharper and likely to gouge the hell out of someone’s snowboard or skis. the bottom was flat but has a rough texture. total weight including sprue is 12 ounces.

the muffin pan had melted underneath. uhh… whoops.

i tore open the can that i poured aluminum. bobble make wheel! weighs 9 ounces. on the top of the pour, the aluminum has a rough surface like pumice. the edge and bottom are smooth. there are tiny little holes from hydrogen bubbles i guess.

here it is again. my only complain is i wish that the surface was a wee bit smoother. 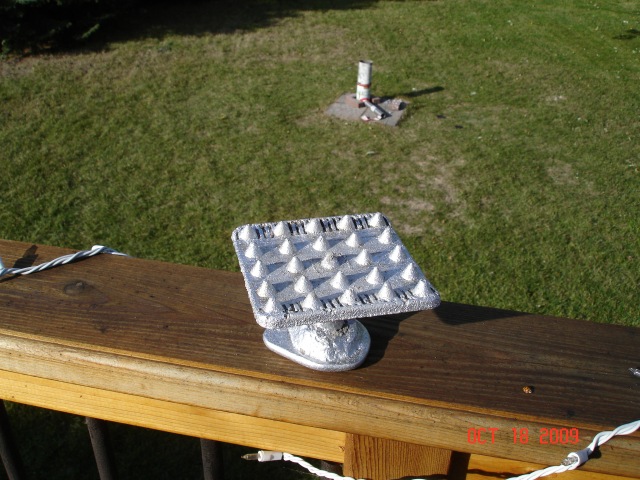