As I posted awhile ago, I got the chance to visit Maker Bot Industries as one of my good friends (Mr. Sharpe, the guy in the background with the beard in the photo above) started helping out Bre Pettis, Adam Mayer, and Zach Smith (the owners) with various things. Maker Bot is the mother company responsible for the first affordable 3D printer kits, The Cupcake CNC, which are currently for sale over at their website for about $750. The unit is a spin off of the great open source Rep Rap Project.

While there I helped build some kits that were being prepared to ship out in a week or so, each cup was filled with different components that are a part of the over all Cupcake CNC kit. So if you recently received your shipment there is a chance that I was responsible for cutting that little piece of Nichrome wire used to regulate the temperature of the plastic extruder. 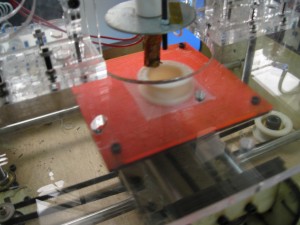 One of the cool things about maker bot is that they encourage you to build more maker bots and the ultimate goal of all 3d printers in the future is to be able to self replicate. On that note it’s not that far off either, 3D printers can now print in metals, and printing companys as well as hobbyists are working on printable circuits. Above is a pulley that the Cupcake CNC is printing for another Cupcake CNC.

One of the larger prints, the Statue of Liberty, on a side note: There are 3 one in new york one in Paris France and one in the Luxembourg gardens.

This is the machine responsible for the Statue of Liberty print.

Mr. Petis also put up some glowing orbs while I was there. 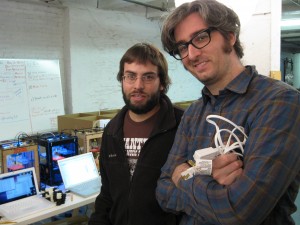 and here he is looking smug after putting up the lighting, and myself here in mid-shrug, (nice electrical chord Bre). Finally to answer that little voice in your head yes! you can print dodecahedrons.