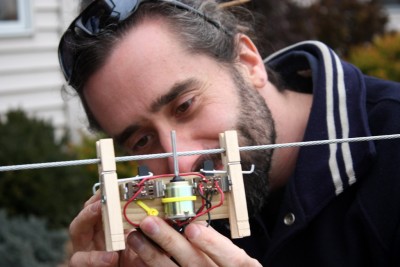 Twin Cities Maker will be hosting our second annual aerial variant on those little wooden derby cars at the Hack Factory on Saturday, November 20th at 1 pm, an event which we’re dubbing:

You will build a racer, attach it to the cable in the shop, and have it race to the finish and back to the start on its own power. Fabulous prizes will be awarded in various categories. We had a potluck for our Alpha and MK1 races; we’ll stick with that tried and true formula. Autumnal jollity will be had by all.

Make Magazine has generously offered to sponsor this event with some pretty swanky prizes, and Bill Gurstelle has donated an autographed book as well. We anticipate a nice participation goodie for everyone who fields a racer, and we’re not talking about something from the shop’s junk bin. More details on prizes in the reminder post in a week or so!

Guests are more than welcome to come see machines fail in humorous ways. Prizes will be based in part on the number of racers, but there’ll be buckets of Make swag, other goodies yet to be determined, and at least a month’s free membership to TC Maker if we get 10 racers. Odds are that everyone will get something swanky.

You need not be a member to participate.

We will provide the approximately 100′ long piece of 1/8″ steel cable and it will be suspended as close to level as we can manage, with as little slack as we can manage. At either end of this cable will be a disk approximately 4″ in diameter that you can bonk your vehicle into. Each racer must travel from the start disk to the end disk, touch that disk, and return to the start disk to be eligible for most (but not all) of the prize categories. Each vehicle will race against the clock, with the fastest overall taking home the grand prize. The entry fee is $10 per vehicle; build and enter as many racers as you’d like. Judging and timing will be by TC Maker  members not competing in the event. Each racer may only win one category.

Any form of propulsion or motive action is allowed, except liquid fueled rocket engines, jet engines, and high pressure air, water, or steam mechanisms. Solid rocket motors are allowed, with the limitations that they be store-bought, not larger than 1/4A rating in size, and be limited to two per racer. Also, your “go” command can not involve outside means of propulsion (e.g., you can’t shove it).

You’ve got a month! Show us your stuff!