Making a Bow, part one

I’ve been threatening to blog what I’m doing at the space for a bit now, so here goes.

Today I decided to start making a pair of bows, as christmas presents for my brothers.

These are going to be made out of red oak, using some 1″x2″x6′ boards I got at menards.  They’re going to be self bows, which means each is made out of a single piece of wood, with no gluing.  I’m shooting for about 50 to 55 pounds draw weight at a 28″ in draw, which should be doable with this wood.

For starters, I picked through all the boards, looking for one that was straight, with no bowing or cupping: 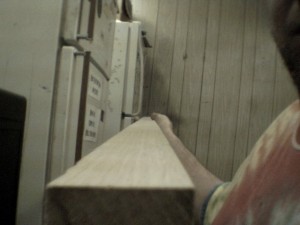 a nice straight board

I also wanted to make sure the grain had the right ratio of growth between the rings: 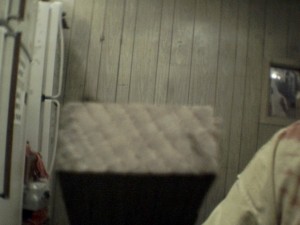 I also wanted a board that didn’t have much in the way of grain running off the edge of the board: 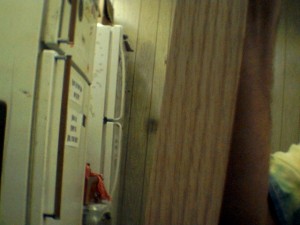 I then measured the board and marked the center, lengthwise and widthwise: 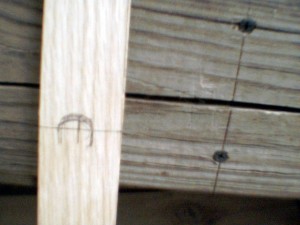 smack dab in the middle

The bow is going to be 1/2″ wide at the tips, looking at it from the front. I marked these lines, and got ready to cut.

This is when I remember that I had broken the handy dandy bansaw blade.

I thought about it for a bit, and came up with this: 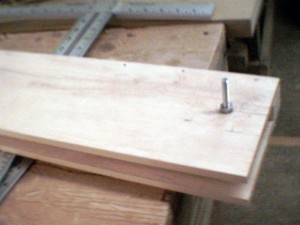 it turns out this is a taper fence 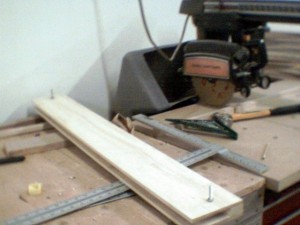 some boards, nuts, and bolts

The idea was, I’d make a “sawboard” I could use with the table saw.  Stick my wood to be cut inside, make sure it’s just covering my lines, run it up against the fence just so, and bingo!

(After some instruction, I’ve decided to never ever feed wood through the table saw “freehand”)

Here’s Michael hard at work on some christmas cutting boards: 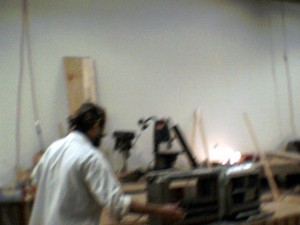 Here’s a very blurry pic of the front profile after all 4 cuts have been made: 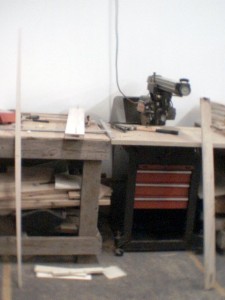 blurry due to small earthquake

To make sure I’m getting the most out of this snazzy $8 camera I picked up at walgreens, I invested in a sophisticated lighting rig from menards: 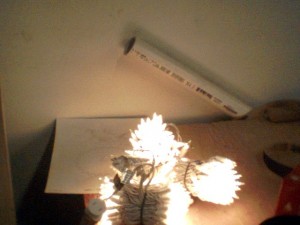 I was getting ready to mark and cut the side profile, when I decided, wow, I’m sleepy. Time to clean up sawdust and head for home.

Part 2 will be uploaded at some point in the future.  Bon appetit!