Careful with that lid, Eugene.

I think the laser cutter has been feeling lonely — it keeps coming up with ways to get my attention. The left-hand hinge and the right-hand gas spring both gave out last night, resulting in a lid that wouldn’t stay open. It also wouldn’t close correctly, which kept the magnetic safety switch from activating, which in turn resulted in panicked emails to the laser team.

I’ve applied a couple of bodges to get the laser cutter up and running again, after a fashion. Firstly, I’ve swapped the center hinge into the left-hand position, so that the lid will open and close properly. Unfortunately I couldn’t get the broken gas spring to stay connected, so while the lid does open, it’s heavier than you’re used to, and it will not stay open on its own. In its place we will temporarily make use of the Official Laser Lid Propper-Upper: 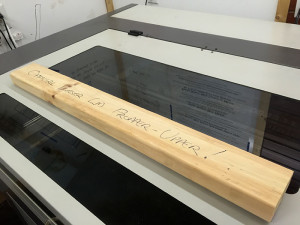 A true wonder of science, that. It shouldn’t be needed for very long; I’ve got measurements of the broken bits, and I’ll get replacements ordered as soon as I can find a source of non-crap parts. (The parts that broke were themselves replaced mere months ago. They were the best crappy Chinese parts we’ve ever over-paid for.)

On a brighter note, the replacement water chiller should be arriving this week, so we can soon say goodbye to Mr Beepy!